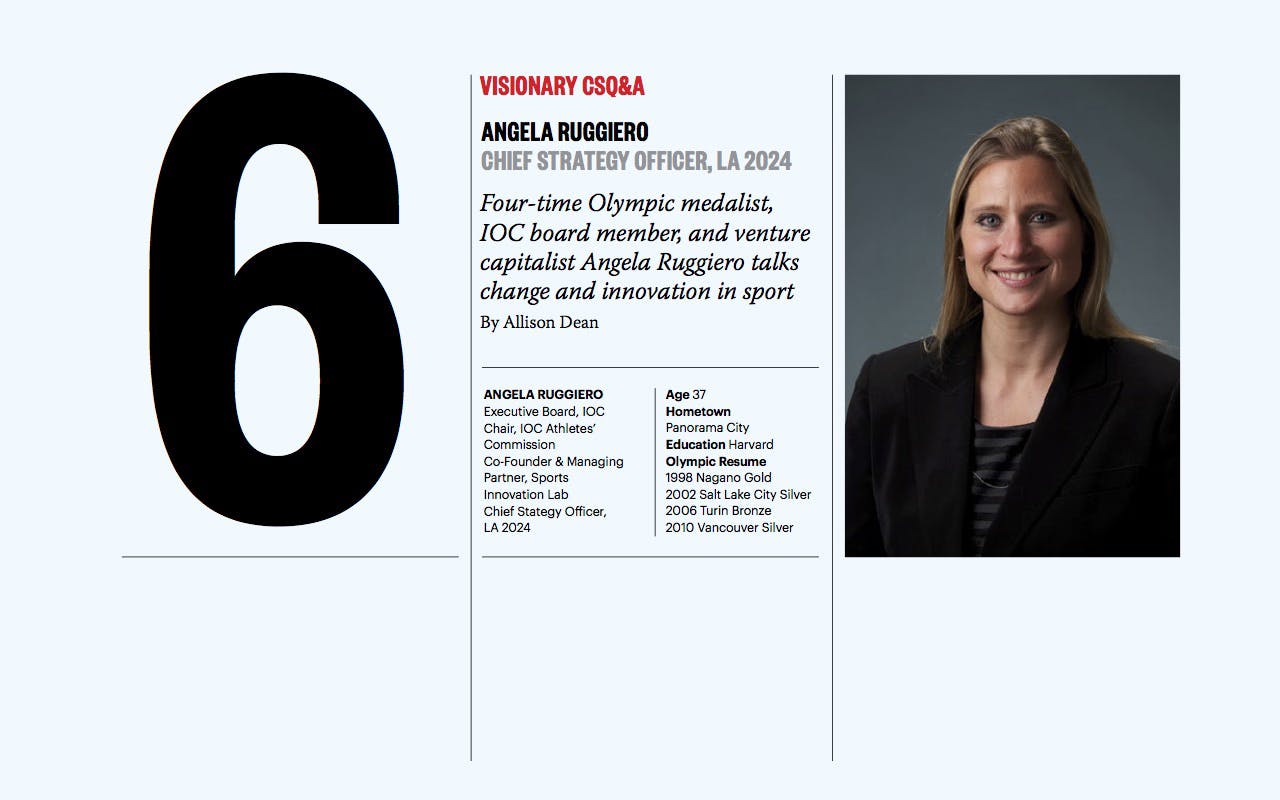 Known as one of the most skilled ice hockey players in the world, Angela Ruggiero’s talents extend far beyond the ice. Not only is she the CSO of LA 2024 and an International Olympic Committee (IOC) Board Member, she is also co-founder and managing director of Sports Innovation Lab, a Boston-based market research firm that evaluates the technologies powering the future of sports to mobilize investors and startups. Ruggiero started playing hockey in a small rink in Pasadena and would go on to play as a defenseman in American ice hockey until her retirement in 2011. She medaled in four successive Winter Olympic Games: one Gold, two Silver, and one Bronze. Ruggiero was inducted into the National Italian Sports Hall of Fame in 2011 and became the only Californian in the Hockey Hall of Fame upon her induction in 2015. Ruggiero spoke with CSQ about the parallels between successful athletes and entrepreneurs as well as her work on the International Olympic Committee (IOC) and the LA 2024 Olympic Bid.

CSQ What similarities do you see between athletes and entrepreneurs?

AR Tenacity, determination, and team-orientation are massive. If you’re building a team, you can’t do it yourself. Even the best entrepreneurs in the world need people around them. Willingness to take risks is a big one – as an entrepreneur, that’s part of your DNA.

CSQ Do players of team or individual sports tend to be more entrepreneurial?

AR I think if you come up through an individual sport, you develop a different skill set than if you come up through a team sport, because you have to rely on yourself more as an individual. Surrounding yourself with the right coaches and trainers to help you optimize your individual performance is important. In a team sport, you actually need everyone to optimize their performance. Every company needs people in all positions; you can’t succeed with all MVPs.

CSQ Talk to us about the IOC.

AR At the end of the day, IOC members believe sport is a catalyst for change and hope. It’s a values-based organization. We’re a nonprofit; 90% of our funding gets redistributed like any other nonprofit to the wider Olympic movement. So while we’re a “big business,” we’re in the business of promoting sport globally. The Olympics are a platform to do that, but the IOC actually funds the global Olympic movement. Having served for the last seven-plus years on the IOC, I can tell you that we just want to use sport in service of humanity. We want to use sport and the Olympics as a bigger metaphor to positively affect change in society. The Olympics are more than just an event; they’re about bringing the world together and all these values that we talk about. Everything we do is to further promote Olympic values worldwide and through that, further inspire the next generation of young people to get involved in sport.

CSQ Are there specific technologies you’re aware of in your role with LA 2024 that you think will make the upcoming Games magical?

AR The thing that LA has that no other city in the world can claim is that we have a whole universe of tech companies. The rate of change is so rapid that things could be obsolete, so rather than suggest a specific technology today, trust that we’re going to use tech in the service of the Olympic Games and that we understand it and will do it well.

CSQ What’s the common thread between your involvement with Sports Innovation Lab and the IOC?

AR Innovation. I love what’s next. I love using sport as a platform for change, whether that’s social change on the IOC or using new technology to connect to the next generation, which is a lot of [what] I do with Sports Innovation Lab. I like looking at LA 2024 and saying, “What’s next? How can we innovate? How are the Olympics in LA going to change not just the city of LA but also the Olympic movement?”

You can read the original C-Suite Quarterly - Summer 2017 article on page 75 below: